Plague of the Zombies 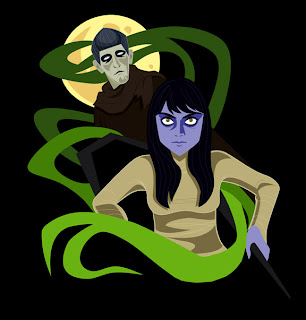 A bit of late news: Little Shoppe of Horrors #23 featuring 'Plague of the Zombies' & 'The Reptile' was released in September 2009. This was the second time I've had my art appear in LSoH's and a great thrill for me, since I love the magazine & adore Hammer so much. So why am I only getting around to posting about it now? Well, basically there were two major reasons. One: I had just started a new job after being unemployed for about 2 1/2 months and Two: I was busy trying to prepare for the Halloween Blog Countdown. Then after that came the Holidays... By then I had forgotten about the fact that I hadn't posted it.
I recently completed a few new pieces for the up coming Little Shoppe of Horrors #24, which will focus on the Mummy films that Hammer made. I'll be posting that art later on when the magazine is actually released.

Also... If you haven't vote for the Rondo yet, now would be the time. Voting will be over in about a weeks time.
Posted by Belle Dee at 9:15 AM 9 comments: