As I mentioned last week, ZaPow had a group show opening on Friday, April 5. The show is 'Space and Time Trifecta' art inspired by Doctor Who, Star Wars & Star Trek. I did three pieces: One Doctor Who & two Star Trek pieces. I was very thrilled to learn that all of them have sold! 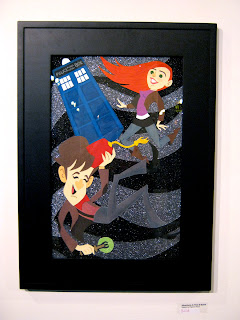 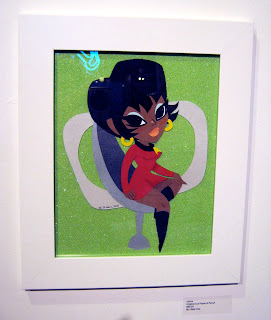 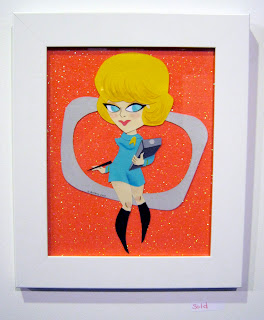 I forgot to scan or take photos before I took them down to the gallery, so I had to get some pics at the show opening. I also wanted to mention that while I was working on these, I was watching 'Star Trek' the animated series on repeat. And I loved it! 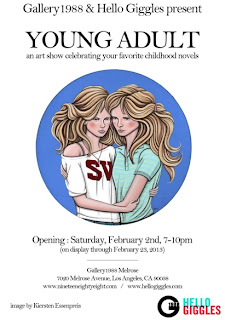 I did this Nancy Drew piece that also sold opening weekend. 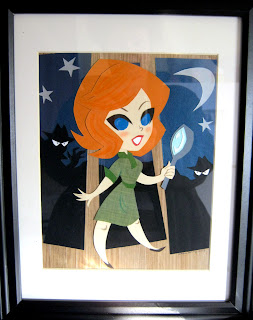 I'm very encouraged by the positive response to my cut paper work, and I'd really like to expand and do more. Especially with some of my Halloween art.
Posted by Belle Dee at 8:08 AM No comments:

Master Ladies of the Universe and other news 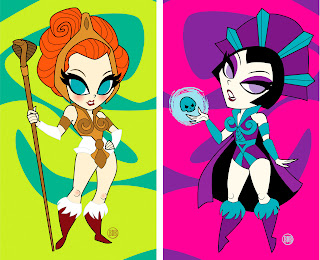 As I've mentioned a time or two before, I'm a Rogue artist over at the super cool website Planet Pulp. It's an online group art show, with a different pop culture theme each month. It's been awhile since I've contributed, and I couldn't pass March's 'Masters of the Universe' theme up. (I am disappointed in myself for not getting something in for February's Hanna Barbara show, there were so many things I wanted to do). So here is my versions of Teela & Evil Lyn from 'Masters of the Universe'.

And speaking of group art shows, there is one coming up at gallery ZaPow this Friday night! The show is 'Space and Time Trifecta' with art inspired by Doctor Who, Star Wars & Star Trek. I have 3 (omg THREE!!) cut paper pieces in this show. One Doctor Who, two Star Trek. And from what I understand, the Doctor Who & one of the Star Trek pieces sold earlier in the week! But the pieces will be on display for the show opening on Friday. And it's a good thing too, because guess who didn't take any photos of the pieces once they were done? That would be me. Way to go, me! I'll post photos when I'm able to get some. 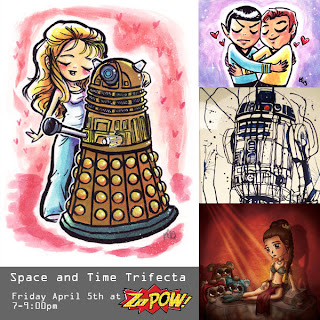 Uh, here's some other things I've been putting off mentioning. The Rondo Awards are currently accepting votes, but voting ends on April 7, 2013 at midnight. So I'll have to do my voting sometime soon.
Also, in the month of May, I will be appearing at TWO cons!! First I will be at GeekOut on Saturday, May 4 in Asheville, NC. Then I will be at WonderFest again this year on May 18-19 in Louisville, KY.
So much to do in such a short period of time. More stuff from me soon.
Posted by Belle Dee at 11:54 AM No comments: