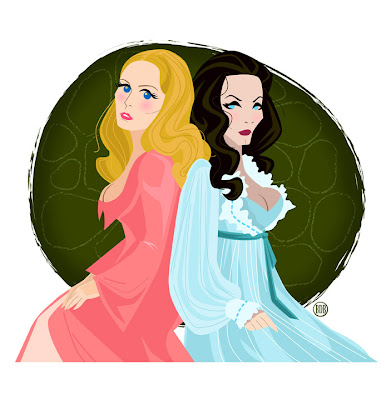 Time to get back to work! I just finished this piece of Veronica Carlson & Kate O'Mara from 'Horror of Frankenstein' (1970). This piece was a bit of a frankenstein monster itself. I drew it twice, and then I had a separate drawing that I did of O'Mara's face that I used instead of the one that I drew from my reference photo. It is meant to be a companion to my 'Vampire Lovers' piece. I'm 80% happy with the way it turned out. I don't know if it's because I've not been drawing as much lately or what, but these two women were a challenge for me. I'm pretty happy with O'Mara, but the Carlson....mmm, I don't know. Maybe I've been looking at it too long. I've got a Veronica Carlson commission coming up so I've been doing lots of sketches of her. Hopefully next time I'll nail it.
I love 'Horror of Frankenstein'. I just saw it for the first time recently and I thought it was awesome! Of course it doesn't hurt that Ralph Bates, who plays Victor Frankenstein, is smoking hot. But this film went in directions that I didn't expect. Feast your eyes on the trailer: