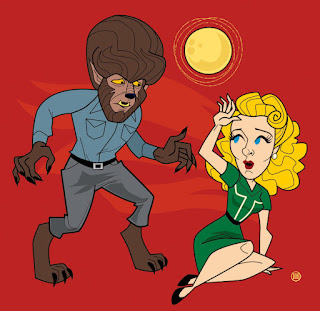 Hello again! Well, here it is FINALLY. The fifth and final piece in this 'Monsters & Mates' series I've been doing. This piece has probably been the hardest to do of the five. You can't even imagine how many drafts it's been through. I think I began doing sketches of this before I started sketching the Dracula piece. I finally figured out how I wanted to pose these two and came to what I felt was a passable resemblance of the characters. Over all I'm pleased, but would have loved to have had more time to tinker with it. However, these pieces were suppose to be quick, easy, fun & simple, so it probably best I don't mess with it too much. This is the most successful Wolf Man piece I've done, and hey, it's also my FIRST Wolf Man final piece. I've been doing sketches for years saying, 'I need to do a Wolf Man'. Well, it did finally get done, in order to complete this circle of 5. If you missed the others you can follow the links to see Creature from the Black Lagoon, Dracula, Frankenstein, and The Mummy. The Mummy is my personal favorite of the bunch, but I thought they all came out alright. There will be a second series of these. My plans are to do 'Dracula's Daughter', 'Son of Dracula', 'The Black Cat', 'Werewolf of London' and ?? Don't know just yet what the fifth will be. I'm still trying to decide.

Wonderfest is coming up fast! This time next week, I'll be getting ready to head up to Kentucky for a jam-packed weekend! So much to do, so many people to see, so little time. I'm still trying to prepare stuff for the show, so I've got to get back to work. Sometime this weekend, I'm going to try to squeeze in some movie time. Am I the only person who hasn't seen 'The Avengers' movie yet? I'm going to try to go see that and the Tim Burton 'Dark Shadows' movie (no, I still have not been). Despite all the poor reviews, I've heard from people that I like & trust their opinion, that it's really not all that bad. Even if it's terrible it's going to look pretty & has Alice Cooper in it. I will report back with my own opinion when I go. ALSO: I have an special post dedicated to my favorite pieces that were submitted to the DeviantArt Dark Shadows contest last month. I entered for kicks, but did not win (you can read about me entering the contest in this update). I watched the entries come in almost daily and from what I saw, I picked my 10 top ten favorite entries. They are really awesome, and I can't wait to share them with you.
Posted by Belle Dee at 8:55 AM 6 comments:

May the Fourth Be With You! Coming May 4th! 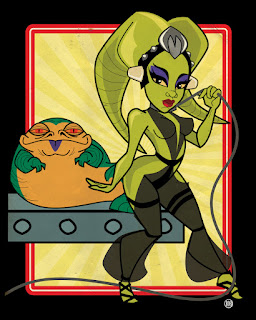 Friday, May 4, Gallery ZaPow! in Asheville, NC is hosting 'May the Fourth Be With You' a Star Wars themed art show & party. This is the piece that I did for the show. I had original thought about doing another slave Leia, but instead decided to do Jabba's first slave, Oola. Then I decided to do Jabba too! Happy Star Wars day!
Posted by Belle Dee at 7:50 PM 3 comments: