I've been in a big fat creative rut this month. The weather has been terrible, my 'real' job has been stressing me out more than usual, and I've been in a funk because I haven't produced anything new in a while. I have some outstanding & looming projects that I need to get finished, so in an attempt to get some creative spark, I decided that I would take the time to work up a finished piece based on a sketch I did recently of Yutte Stensgaard as 'Mircalla' from the film 'Lust for a Vampire' (1970).
'Lust for a Vampire' has never really been a favorite of mine, but it's been growing on me. This is the second film in Hammer's 'Karnstein' trilogy. The first being 'The Vampire Lovers' (my favorite), and the third being 'Twins of Evil'. I've been on a 70's Hammer Horror kick this month, triggered by the recent DVD release of 'Vampire Circus' (1972) to DVD/BluRay. I enjoyed 'Vampire Circus' so much, I decided to go back and re-visit some of the Hammers from that time period, that I don't really watch as often as some of the earlier films. Re-watching 'Lust' I find that I actually do enjoy it. It might not be as good as 'Lovers' but it does have it's own charm. And Ralph Bates, who I never tire of looking at.
Posted by Belle Dee at 10:13 PM 5 comments:

I Eat Birds of Paradise for Breakfast... 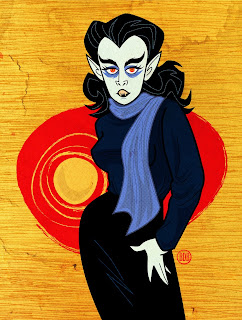 I did this piece back in September of 2010, and for whatever reason, I never got around to posting it. Probably busy thinking of other things (like Halloween) at the time. It was right around 'back to school' time, and I was feeling the need to watch 'Blood of Dracula', a fun, 1950's teenage vampire flick. In fact they probably just could have called it, 'I was a Teenage Vampire'. I had been wanting to draw the character Nancy, turned vampire for awhile, so here she is! AND, here is the trailer:
Posted by Belle Dee at 12:38 PM 3 comments:

Happy New Year everyone! Welcome to 2011!
I'm still busy trying to finish up projects from 2010, but I've got some fun stuff coming up soon after that. Stay tuned....
Posted by Belle Dee at 6:56 PM 2 comments: