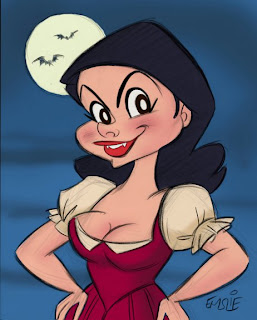 My birthday was this week. Yay me! Anyway, no big deal, I had to work. I had many well wishers, and one of my favorite artists ever, Pete Emslie, did this sketch of me. I've been a huge fan of his and I've been following his blog The Cartoon Cave for several years now. I love his work so much and was so thrilled by this drawing, I just had to share it. Ok, I'll shut up now, but look how cute I am!
For my birthday, I bought myself a bicycle. So I'll be out trying not to run down pedestrians this weekend. 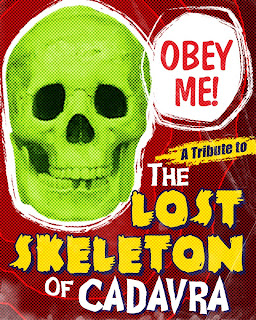 ALSO... Do you love 'The Lost Skeleton'? Well, I sure do. So much in fact that I would like to host a tribute to 'The Lost Skeleton of Cadavra' and 'The Lost Skeleton Returns Again'. For two weeks in September, it's 'Lost Skeleton Week! And another week!" I'll be doing a few drawings for it, but I'll mostly be playing host. If you're interested in doing something for the tribute, leave a comment below. I'm mostly looking for art, but if you've made costumes or built a transmutitron that you want to share, that would be cool too. It will most likely be the second and third week of September. Then it will be almost time for 'The Halloween Countdown'!
Posted by Belle Dee at 7:57 PM 13 comments:

Fun at the Black Lagoon 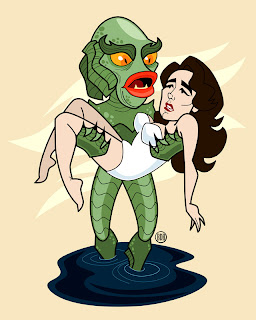 Well, I don't know what to say about this one. It pretty much speaks for itself. Everybody knows 'The Creature from the Black Lagoon' right?
I was thinking about doing a series of the Universal Monsters with Monster's Mate of choice. So hopefully, there will be more to follow. I've got some ideas about what I'm going to do for the other ones. I decided to start with the 'Creature', since I've never done a finished piece of him before. And it's a good summer time subject.
Enjoy this trailer:
Right now I'm working on illustrations for the upcoming Little Shoppe of Horrors magazine. This issue will focus on Roman Polanski's 'The Fearless Vampire Killers' aka 'Dance of the Vampires'.
Posted by Belle Dee at 8:00 AM 10 comments: